Misgivings about the Internet of Things and hyper-interconnectedness

By ryv's blog April 29, 2016
Last night I heard a lecture delivered by a chap from HPE - HP Enterprise for those of you who forget about their big breakup. He is in charge of innovation in the Asia Pacific region and he spoke a lot about the Internet of Things (IoT), drones, driverless cars etc. Sure, we really are moving towards a world where human interaction becomes far less of a factor when driving, delivering packages or even turning on the lights at home...

It really got me thinking about the impact to humanity and whether the pros will outweigh the cons. The hyper-interconnectedness of the world has it's upside but I think it's darker downside needs light shone on it. If your whole house is wired with sensors, motors and control units, then is it a stretch to muse on when the first house is compromised? If an attacker took control of your home just what could he do with it? Annoy you with the lights going on or off, tracking your movements throughout the place, knowing when you're asleep and therefore vulnerable or good old fashioned voyeurism. These options just popped into my head in the last 30 seconds and I'm a reasonable good, respectful and law abiding person. Imagine if I was a naughty ne'er do well?!

Quite apart from the issues inherent in being completely trackable and giving away any semblance of privacy is the issue that arises when the power goes out. Can one still open the doors, the blinds or the windows if it's all automated? And I have concerns over what might happen when the power comes back on and the house receives a power surge that damages the systems controlling all these components. There is a level of complexity to a house with IoT than there ever was before and the delicacy of these systems is not to be underrated.

Moving away from IoT to driverless cars and drones. The HPE chap (Roger something...) spoke at length about these too. While I've watched the whole notion of autonomous vehicles with some interest over time, I quite like driving and I'm not really prepared to give that up. I completely understand why some people hate it, why it would be a great thing for the elderly for example or infirm to help them get around, but I heard some absurd claims about reduction in parking spaces or some other nonsense. Autonomous vehicles still have to stop somewhere while you go and do stuff. How do you reduce the number of carparks exactly? I can also foresee more of these vehicles on the road than now, with more traffic as people who haven't got licenses or who can no longer drive take advantage of a car that will drive them anywhere. The limiting factors on road users will change, and some of these that move people off the roads (rightly or wrongly) will potentially disappear. Thinking about this from the transport and logistics perspective it's possibly an awesome thing to have trucks that can drive endlessly in a non-stop cycle with none of the pesky driver considerations we have now... but I can't help but think of the cost to human jobs. I worked in transport for a while and there are guys who genuinely enjoy getting out and about in the trucks, driving line haul or pottering around town. These guys (mostly) have a great skill set and will not be required after the introduction of an autonomous trucks. On to the sidelines for you - and then we have killer trucks chasing us like in the movie "Fortress".

Drones are becoming a big thing and will continue to get bigger over time. With many companies hoping to use them for deliveries - especially medicine or aid into remote areas - I think they're great. The potential for help is enormous... as is the balanced potential for harm. Drones already kill a fair number of people day to day in war torn areas as the US or other countries deploy them to blow shit up. Spy drones are already about looking into things they shouldn't be so privacy is going to take yet another hit, and the risk of some idiot flying their stupid drone into a plane or helicopter - yeah that will happen. We have the guys flying their drones over fires and things - which is a great tool for seeing what's happening (don't get me wrong - they have some amazing uses that preserve human life) but also restrict what other aerial vehicles can do (because they are in the flight space).  We have had water bombers diverted from fires with real concerns about them hitting drones. I think the issue there is more of command and control than the actual drone being a problem - coordinating a fire response is no trivial issue and someone with a drone in the way is a problem.

The end result of all this extra computer stuff floating around is a far more cluttered Internet and let's be honest - security is a massive issue. Complex software in complex hardware = mucho issues with security. Anyone who has done some programming knows that as complexity goes up, so does risk of an issue arising in the code. The reliance on the Internets infrastructure will increase and although the 'net is a most distributed system there are definitely ways to greatly impact a country. Imagine for example if someone attacked the Internet systems of a country and took down it's ability to manage routing - all those data packets with nowhere to go. How would it affect daily human life? I can't get my IoT coffee machine to work or I can't get my medical aid system to work because both of them connect back to a central management system located either at home or somewhere else. Uh oh. Can we get the 'net back up? We've already seen hospitals compromised because of holes in code or heaven forefend - people have no clue and use shite passwords or it's set up in a way that might be more user friendly and is far less secure than it could be.

Before we as a civilisation dive head first into the pond of hyper-interconnectedness I really think we need to slow down and understand the ramifications of what is going to happen. Big companies are not going to care - they have to make money and look after their shareholders and screw anyone else. The government needs to be across this and understanding it with techno-geeks involved to get through the heavy nerd stuff and legislate to improve protections and procedures around the IoT and associated systems. For example - drones are great, until they kill someone through stupidity or neglect. So let's try to legislate it and get it out there what you can and can't do. Something is better than nothing and attempting to get something in place is better than sitting back saying "I'm not sure - it seems like techno-babble to me!".

I for one welcome our new robot overlords when they arrive. I'd prefer the future to be a mix of humanity assisted by robots and IoT and not this: 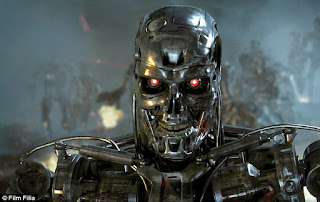 I tried but I really couldn't resist putting up one of these pics. Ah pop culture. I hope that in some small way I've opened your mind to some of the other side of the issues I've talked about. I'm very excited about all these new gizmos and things - I can't help it - I'm a geek too. I just have a pessimistic side that impels me to consider the impact of new technology.