By ryv's blog May 17, 2016
After my poor little TPlink Router bit the dust with a recent power fluctuation I was keen to get something with a solid WiFi capability. The TPlink router I was using didn't have the greatest coverage around the house, and certainly not outside the house, and with the recent installation of a Chromecast I was keen to find something with a bit more zing. Also, due to my dodgy cabling set up, I have half my machines on one side of the house, and the other half on the other side. The cabling between the two goes through the router and I wanted a gigabit link between the two halves.

So a router with 5GHz wireless and gigabit networking? My local nerd supplier handed over the $399 Netgear D6300 and told me it was the best he had. He noted my sceptical look, but assured me that it was good to go. OK I'll have a crack at it and see how it goes.

It took about 45 minutes to configure it - I've got a fairly complex network with a lot of crap all over the place, all sorts of forwards and Dynamic DNS configured. I also have a large number of static DHCP entries - nightmare. Once I got it all across, plugged in and set up and away we went. I quite like the Netgear method of showing what's happening on the network. That's one of the very few things I do like about this router.

Here are the other things: 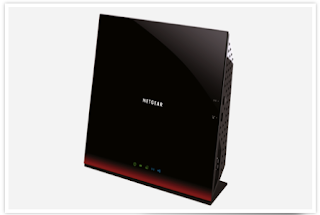 OK so here are the things that suck about this router:
All in all, for the price, I'm a bit ambivalent towards the D6300. My dirty old TPlink, with no frills, worked pretty well and I wasn't hating on it too much when it died. Now that it is gone, this Netgear has a bit to do before I'm impressed. We will see how it goes over time, however I wouldn't rush out to buy this one.